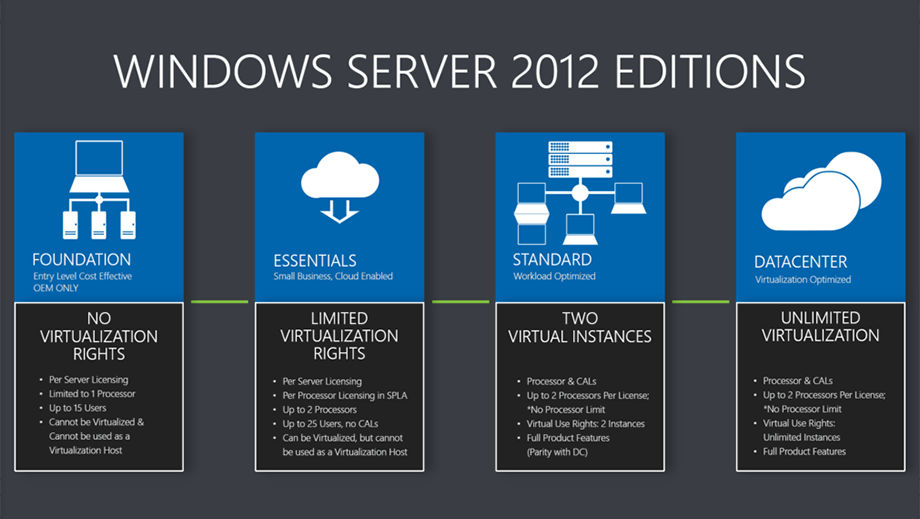 Windows Server 2012 is the fifth release of Windows Server. It succeeds Windows Server 2008 R2. It was generally made available to customers starting September 4, 2012.It has four editions. It can switch between “Server Core” and “Server with a GUI” installation options.

Server Manager in Windows server 2012 has been redesigned with an emphasis on easing management of multiple servers. It includes a new version of Windows Task Manager together with the old version. The tabs are hidden by default in new version. It shows applications only. A new Processes tab has been introduced where the processes are displayed in varying shades of yellow, with darker shades representing heavier resource use. A new Details tab includes information found in the older versions. The “CPU”, “Memory”, “Disk”, “Wi-Fi” and “Ethernet” graphs are shown undera new Performance tab . A “Disk” activity graph is disabled. The CPU tab option no longer displays individual graphs for every logical processor by default. Windows Server 2012 includes IP address management role for discovering, monitoring, auditing, and managing the IP address.

The Server Manager includes a new section to replace the Active Directory Domain Services installation wizard. A Graphic User Interface has been added to the Active Directory Recycle Bin. A Domain could be used to set multiple password policies. Virtualized domain controllers can be safely cloned. Upgrades of the domain functional levelcan be performed entirely in Server Manager. Active Dssirectory Federation Services is installed as a role. The “Powershell History Viewer” option can be  entered to view Windows Powershell commands used by Active Directory Administrative Center.

Network virtualization, multi-tenancy, storage resource pools, cross-premises connectivity, and cloud backup has been added to Hyper-V. Hyper-V virtual machine can access up to 64 virtual processors, 1 terabyte of memory and 64 terabytes of virtual disk space per virtual hard disk. 1024 virtual machines can be active per host. 8000 can be active per failover cluster. SLAT is a required in Windows Server 2012 only for the supplementary RemoteFX role.

Resilient File System (ReFs) is a new file system in Windows Server 2012. It is initially intended for file servers that improves on NTFS in some respects. Major new features of ReFS include: Improved reliability for on-disk structures, Built-in resilience and Compatibility with existing APIs and technologies.